The Top 3 Reasons to Install a Lantern Roof 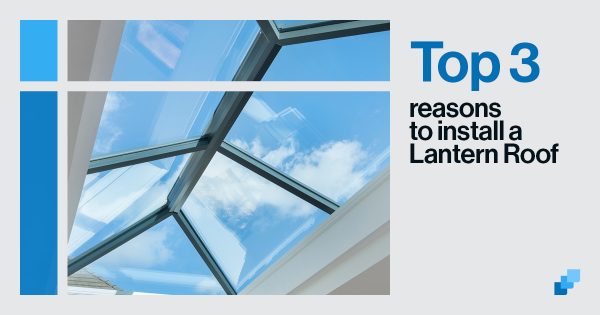 A Lantern Roof, a glazing application that somehow exudes both classical and futuristic qualities in equal measure. Coming in with a large surface area, huge natural light potential and an undeniable wow factor, a Lantern Roof is a glass implement that immediately seizes the attention of those in its presence.

But what makes a Lantern Roof so special? Why do so many choose to crown their new extension with this glassy showpiece? What are the reasons behind its growing popularity across the UK fenestration industry? So many questions, so little time.

Luckily, your Lantern Roof journey of discovery has brought you to the official Clayton Glass company website. With 65 years of glass-producing experience under our belts, and 4 IGU manufacturer of the year awards in the in the trophy cabinet, you’re in capable hands.

So, without any further ado, let’s get into 3 sure fire Lantern Roof benefits and reasons to install one in your home.

So, you’ve installed your big fancy new Lantern and you’re feeling pretty happy about the state of the universe. First of all, let’s take a moment and just appreciate the visuals. Clean, tinted glass, a sturdy frame, and perhaps even a nice little hanging light feature in the middle. Lovely.

Ok, now that you’ve soaked up all that aesthetic bliss, let’s talk about the first big reason to install a Lantern Roof: natural light entry.

Because of your new Lantern Roof’s elevated, multi-surfaced anatomy, it is able to capture light from numerous directions. This means that you will receive a more consistent supply of those delicious sun beams than you would with a skylight or flat roof.

“But why do I want so much light in my home?” you may wonder, “what’s in it for ME”. We’re glad you asked. The list of benefits of spending time in a sunlit area is so long it could probably cover the entire surface area of your lantern roof.

These benefits are in majority related to your well-being. We’re talking increased vitamin D for healthy bones and muscles, increased secretion of serotonin for an improved mood and increased regulation of melatonin for more restful sleep.

So, with an increased level of natural light crossing the precipice into your home, you could be that bit stronger, happier and perkier. And with its humungous light-capturing potential, a Lantern Roof can get you there.

Let’s get something out in the open, it’s ok to be a bit superficial.

Sure, maybe you want a Lantern Roof for the various vitamin boosts and hormone regulations that come with your now frequent natural light exposure, or maybe you like the idea of a roof that performs to a market-leading level and offers you unsurpassed technical security (more on that later).

Maybe that’s what you tell people anyway. But maybe, maybe, the main reason you want a Lantern Roof is because of that unrivalled wow factor it provides, and that’s ok. It’s ok to allow that smug smile to cross your face when you see that jealous look in the eye of an unsuspecting house guest. We won’t tell anyone.

“I didn’t know you had a Lantern Roof!” Your house guest exclaims. “Oh, this old thing?” you’ll say, with an air of nonchalance.

Anyway aesthetically, both internally and externally, a Lantern Roof is the ultimate sight for sore eyes. Tall and imposing, your new Lantern’s angular and timeless beauty will serve as the centrepiece of any modern extension, drawing the eyes like no other glazing application.

However, while it may seem like this wow factor is purely for inspiring Lantern-envy, there is another reason you might want this good-looking glazing application in your home. Two words: resale value.

We’re not going to go too much into it, and we certainly can’t give you an exact price or percentage increase, but there’s a good chance a Lantern Roof could rise the price of your home.

Think of it as a competitive advantage over lantern-less houses, A USP to your home’s brand, a proverbial feather in your humble abode’s cap. Lantern’s look nice, and people like things that look nice. Just wait until they hear about the performance…

Now I know so far, we’ve talked quite a lot about the LOOKS of your Lantern Roof, even going as far as to say that it’s ok to be a bit superficial when it comes to aesthetics of your new roof gadget. And yes, it does look nice. But if we could stop staring at it for just a couple of minutes and talk about what’s under the hood.

Much like an automobile, no one will care too much about how your new glazing application’s looks if it doesn’t “go”, if it doesn’t perform. You can fawn over a new Lamborghini for a while, but eventually you’re going to want to drive it, and if the engine has been replaced with a toaster, your opinion of it is going to fall faster than the temperature inside a poorly-insulated extension.

So now you’re probably thinking “Ok, so performance is definitely important, but what aspects of performance am I looking for?” “What are the metrics by which I can measure performance?” and “Why would anyone replace a car engine with a toaster?”

Well, we can answer two of those.

Ok, so let’s discuss these together, both the areas of performance you need and the metrics to look out for. What we’re talking about here is the glass that is used in your Lantern Roof, and specifically what it needs to be able to do.

Numero uno would be the ability to insulate. Your choice of roof glass needs to be able to reflect heat back into your home as opposed to simply letting it pass through. In the glass world, insulation is measured by something we call a “U-value”, with a lower U-value being superior to a higher one. So, say the glass units in your Lantern Roof all had a U-value of 1.2 – it would insulate better than a Lantern Roof comprised of glass units that had U-values of 1.6. Simple.

A well-insulating Lantern could be that difference between a cosy extension and a crisp one. Because as we all know, heat has a propensity to rise, and if something rises far enough it’ll hit the ceiling. The question is: what will it do when it gets there? Will it bounce off or pass through? Well, that depends on your glass.

So, we’ve established that you want your glass units to insulate, reflecting heat back into the home when its cold outside. But what about when it’s warm? What about when that British summertime heat hits hard?

No one wants an oven for an orangery. In the summer you need a place that stays cool, and a high performing Lantern Roof can help you create just that. Another glass property to consider is that of “solar gain”.

Solar gain is a measure of how much heat crosses the precipice from the exterior of the glass to the interior of the glass, dictating how warm the inside of your extension gets. The metric here is the “G-value”, again with a lower number being superior. For example, a glass unit with a G-value of 0.2 is preferable to one of 0.4, meaning 80% of solar heat energy would be reflected compared to 60% in this instance.

So now we’ve explored temperature, warming up with a low U-value and keeping cool with a solid G-value. But when it comes to high performance roof glass solutions there are other areas where they outperform their A, B or C-rated counterparts.

The first of these is noise reduction. A premium roof glass allows less external noise to pass through its surface than standard glass. So, if you’re a reader, a gamer, or someone who just likes a bit of peace and quiet, a high-performance glass may be what is needed in your Lantern Roof.

Finally for this section, let’s talk about self-cleaning. Believe it or not, thanks to a complicated chemical reaction wherein dirt is broken up on the surface of the glass and carried away by rain water, your new Lantern Roof may very well be able to clean itself, how cool is that.

So, there you have it, the top 3 reasons to install a Lantern Roof. Whether it be for wonderful aesthetics, increased natural light exposure, or the long list of high-performance-related benefits, a Lantern Roof can elevate your homelife into a new echelon.

So now you’re fully clued up on all thing Lantern Roofs, but we know you have one more question, we can see it in your eyes…

“What glass do you recommend for a Lantern Roof?” The answer, my friend, is SMARTGLASS Ultra86.

Do you remember before when we were talking about U and G values? Well, SMARTGLASS Ultra86 comes in with 1.0 and 0.14 respectively. Making it the best performing roof glass available for solar gain, and also one of the best in terms of insulation. SMARTGLASS Ultra 86 is also truly self-cleaning, noise-reducing and comes with a 10-year warranty.

Find out more about SMARTGLASS.

Enjoyed this? Try these…

Other Sources on Reasons to Install a Lantern Roof…