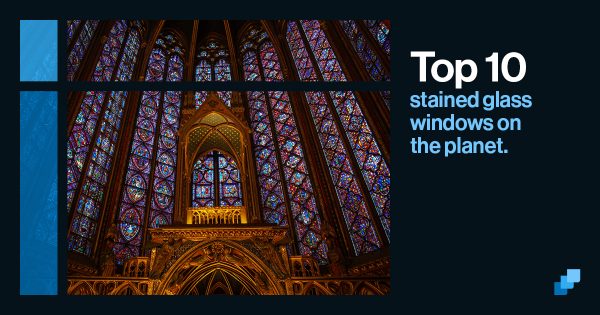 Is glass the greatest material of all time? At Clayton Glass, we think you’d be hard pressed to name a better one. Firstly, not only is it durable, secure and completely recyclable. Glass is a blank canvas, and furthermore a medium for expressing colourful, and complicated, genius. Subsequently, ever since everyone’s favourite transparent insulator became the norm in households all over the world, artists and creatives have been showcasing their talents, in the creation of some truly exceptional works of stained-glass window art.

Thereby, today, we are very excited to count down, what we think are, the top 10 most awe-inspiring works of stained glass that currently exist in the world today. So, without further ado, let’s kick things off with number 10…

PLEASE NOTE: All choices are the opinion of this writer.

#10: The Windows of the Nasir-al-Mulk Mosque – Shiraz, IRN

Incidentally, it is locally known as the “Pink Mosque”, and was built between 1876-1888. This, in an era where the Qatar Dynasty controlled Iran. Furthermore, its construction was ordered by the then ruler of Qatar – Mirza Hasan Ali. Iranian architects Mohammad Hasan-e-Memar and Mohammad Reza Kashi-Saz-e-Sirazi designed the Nasir-al-Mulk Mosque. Flyer.

I know what you’re thinking: If this beautiful stained-glass art only makes it in at number 10 on the list… I can’t wait to see what’s at 1-9! Next up number 9…

#9: The Netherlands Institute for Sound and Vision – Hilversum, NED

In at 9, we have the Netherlands Institute for sound and vision, specifically, the building’s magnificent stained-glass façade. Located in Hilversum, a Dutch city about 20 miles outside of Amsterdam, the function of the “Beeld en Geluid”, as it’s known locally, is to collect and store important audio and visual data from throughout Dutch history. Subsequently, It is also a popular museum and tourist attraction.

The awesome array of stained glass on display adds up to a truly unique and remarkable looking glass structure. To expand, 2244 individual glass panels comprise the incredible glass façade. Stained with images of famous events from a plethora of Dutch visual heritages. Initially, graphic designer Jaap Drupstein came up with the excellent idea of housing all dutch media history in one location. The building opened to the public in 1997. Colourful.

“An inspiring, creative and accessible meeting place for both private individuals and professionals.” – Beeld en Geluid

#8: The Glory Window of the Chapel of Thanksgiving – Dallas, Texas, USA

At a respectable number 7, we have the atrium roof of the Gran Hotel Cuidad de Mexico. The hotel is located in the beating heart of Mexico, the capital, Mexico City – the 2nd largest urban area in the world! The building opened in 1899 as a department store, and, for a long time was the largest of its type in the whole of Latin America.

The beautiful stained-glass Atrium roof arrived in 1908, and went on to become a hugely popular tourist attraction over the subsequent century. Renowned French artisan, Jacques Grubert designed and assembled the “Tiffany” stained-glass art. Grubert created the Vitral in France, using over 20,000 individual glass segments, of varying shapes and sizes. Creative.

In at number 6, we have perhaps the most extravagantly shaped entry on this list, in the form of the incredible skylight at the Palau de la Musica Catalana in Barcelona. The Palau de la Musica Catalana, as it’s name suggests for the Spanish speakers amongst you, is a concert venue. The Palau underwent construction between 1905 and 1908, holding its inaugural concert of February that year.

The skylight is the centrepiece of the Palau, which receives over 500,000 visitors from all over the world, every year. It’s golden-bluey patterns, and eccentrically curved shape, are in representation of the sun and sky. Spanish artist Antoni Rigalt designed the skylight. Flamboyant.

“The only concert house in the world that relies on sunlight during the day.” – OVERTURE

Heading into the top 5. At number 5, we have a historical stained-glass art masterpiece, that you may have heard of. This is the South Rose Window of Paris’ most famous Gothic Cathedral – Notre Dame. The window is the centre-piece of the awe-inspiring structure. This is some feet when you consider what else Notre Dame has to offer, including, but not limited to: the cathedral towers, the west façade and the flying buttresses.

The window itself is approaching 800 years old, and depicts key moments from various stories throughout the new testament. However, even if the religious side of things is not your cup of tea/goblet of ceremonial wine, you’d defy anyone not to be dazzled by the beauty of the South Rose Window. Especially, at key points in the day, when the sun hits it just right, and Notre Dame is bathed in the window’s colours. Famous.

“One of the greatest masterpieces of Christendom is the three rosettes of Notre Dame Cathedral in Paris.” – Notre-Dame de Paris

At number 4, we have the windows of the Saint Sebastian Metropolitan Cathedral of Rio de Janeiro, Brazil. Before you read on, you have my permission to stare at it for a good few seconds, I mean just look at it… Ok, let us continue. The cathedral is a large triangular dome-shaped structure, with four huge decorative stained-glass windows stealing your eyes as soon as you enter.

Interestingly, Brazilian architect Edgar Fonseca designed the cathedral, it subsequently then took a full 15 years to build! This, between 1964 and 1979. Subsequently, nowadays, as is a common theme for the stained glassworks on this list, the cathedral, and its effervescent windows, are a major tourist attraction. Popular.

“Built in the style of an ancient Mayan pyramid.” – The Vintage News

While it looks incredible in the photo above, the Baptistry is said to be something you have to see for yourself, it has subsequently been firmly added to this writers’ bucket list. Artist, John Piper, designed the Baptistry window, and architect Patrick Reyntiens took charge of it’s assembly. Furthermore, 195 individual glass panes make up the stained-glass window, with a huge range of different coloured stained glass. Art.

“An impressive architectural and spiritual experience all in one. I know of no other place that offers the same.” – Know Britain

We are now firmly in the big boy leagues when it comes to stained-glass art masterpieces. Just missing out on top spot, at number 2, we visit Paris for the second time. This time we are heading over to the Sainte Chapelle Cathedral for some jaw dropping stained glasswork. Conversely, the entrance to Sainte Chapelle is said to be dank and dark. Similarly, the narrow spiral staircase evokes claustrophobia. But, after you’ve climbed to the top, everything changes. One thing about the stained-glass that hits you as soon as you set foot in the Sainte Chapelle Cathedral main hall, is simply how much of it there is. The main chapel contains 15, 50-foot-high stained-glass windows, almost completely encompassing parts of the building.

Similar to the South Rose Window of Notre Dame, the windows of Sainte Chapelle are a tribute to the new testament, depicting 1,113 different scenes of both the new and the old testament (yes, you read that correctly – 1,113!). King Louis IX, the 13th century French ruler, comissioned the construction of Sainte Chapelle. Epic.

Here we are. Number 1. The pinnacle of stained-glass artistry. You may look at the blue windows of the Brazil’s Santuario Dom Bosco Church and think the design looks relatively simplistic, compared to other entries on this list. But, in the opinion of this writer, you can have all your fancy designs telling stories about ancient biblicisms, and your obscurely shaped skylights and atrium rooves, piquing the interest for a limited time.

But, according to every account we have available, there’s nothing quite like your first steps into the Santuario Dom Bosco Church. Stained-glass is not just about creating complicated designs, or pretty colours. No, at its visceral best, stained-glass dictates the mood of a room, thus tugging on the emotions of the people inside that room. When you look back in your older years, you are going to remember that room, because you will remember how that room made you feel. So, when it comes to creating a magical environment, cut away from the world, through the use of glass stained with colour… there’s nowhere on Earth like the Santuario Dom Bosco.

Located in the country’s capital city of Brasilia, Santuario Dom Bosco is a hugely popular tourist destination. Interestingly, the structure, built in 1883, is one of the older entries on this list, despite it’s youthful appearance. Also, looking at it in more detail, you’ll see that thousands of small glass squares make up the windows, stained in a variety of different shades of blue. Another one to add to the bucket list. Awe-Inspiring.

Conclusion: The Most Awe-Inspiring of Stained Glass Windows

To summarise, the top 10 most awe-inspiring stained-glass windows has been a lot of fun to write. Firstly, it’s important to acknowledge all those who worked on these masterpieces. Specifically, because without them these astounding stained glass works of art wouldn’t exist! Secondly, the masterpieces themselves deserve our upmost respect as tourists and travellers, they may not be around forever. Thirdly, and most importantly, thank you for reading this piece on the top 10 most awe-inspiring stained-glass windows.

Also, Check Out These Other Great Reads!