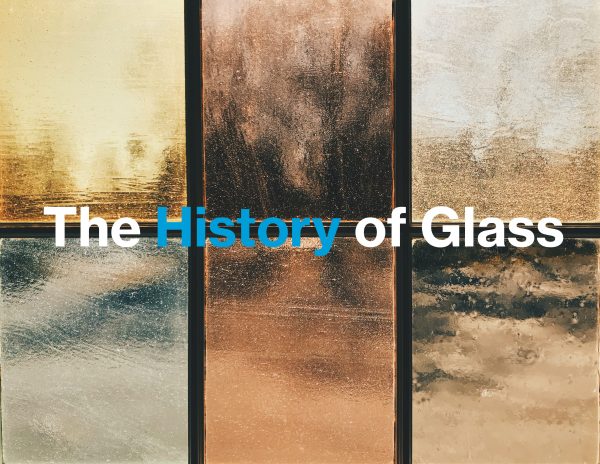 Glass is everywhere in the 21st century, and the uses for the material are becoming more and more creative, year on year. Specifically, this is the history of glass, looking at when glass was invented, natural glass and more. Let’s take a look at the remarkable journey the glass in your window frames has taken over the last 5,000 years.

It’s therefore quite difficult to believe that glass begins as a material many of us wish we were closer to on a more regular basis – sand. Glass was ‘invented’ from melting a quantity of sand. However, nowadays this is rarely a naturally occurring phenomenon as the sand requires a heat of at least 1700 °C (3090°F) to undergo glassification (the process by which sand turns into glass). It therefore took many, many years of human evolution before we had the tools required to produce glass.

The History of Glass: Natural Glass

The History of Glass: Man-Made Glass

For nearly 2000 years the art of ‘glassblowing’ was the go to method of glass production in the western world. Glassblowing involves rotating the blowpipe over the molten glass, whilst in the furnace, causing the sticky glass to anneal to the instrument. The molten glass and blowpipe are then moved to a small steel table, known as a ‘marver’, where the glass is rolled in order to evenly distribute heat. From this point the glassblower will take deep breaths down the blow pipe, with the goal of creating air bubbles in the glass, causing the shape and size of the glass to distort and change. The glass would be oscillated during this process in order to create an even finish.

However, methods for creating uniform glass sheets, at specific measurements, were basic and inconsistent. That was until the 1950’s when glass manufacturer Pilkington came up with the “float glass process”. This, subsequently, became a key moment in glass history. The float glass process consists of a sheet of molten glass floating as a contained unit on a bed of molten metal, which can be lead, tin or another metal alloy. This revolutionary glass making process allows the creation of uniform glass sheets that are of a consistent depth across the whole area. Modern day glass manufactureres still use the float glass process today!

Glass: The Material of Modernity

We are in a remarkable era of glass history. An incredible feat of glass engineering that 64% of us take for granted, is an invention that cheats evolution, in a way only matched by advancements in medicine – glasses. Glasses, specifically lenses, consist of varying thicknesses of curved glass that direct light into the retina, in those where the eyes themselves have become less efficient at the task. Thus, allowing the individual to be able to see. Interestingly, there are various accounts of when this glass was invented, with some dating back to the 17th century and some not until the early 1900s.

The History of Glass: Conclusion

Thank you for joining us on a look at the history of glass! In conclusion, glass is one of, if not the sole, greatest material we have on planet earth. Whether it be natural, or man-made, glass has always been an ally to the human race, and will continue to be that very thing, well into the future. When you think of the future, what do you picture? Glass. Subsequently, at Clayton Glass, we can’t wait for what comes next in the evolution of glass. Finally, thank you for reading ‘the history of glass’.

Furthermore, here are some similar pieces!