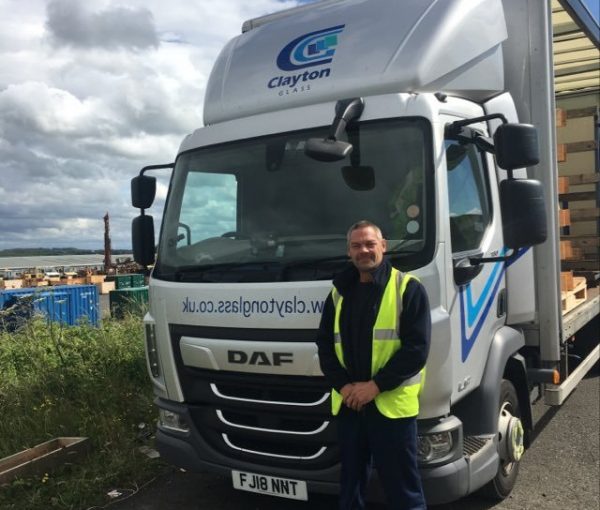 On the morning of Monday 22nd June, John Douthwaite (pictured) had not long left Clayton’s headquarters in County Durham, when he encountered a man lying on the pavement following a serious heart attack. 38-year-old motorbike racing enthusiast, & ex-mountain rescue volunteer, John, exited his vehicle and performed chest compressions – saving the man’s life. John has given us permission to recount the events of that day.

“It was around 8 o’clock in the morning.” says John.

“I had just left work about 10 minutes before. It had been quite a busy morning at Harelaw (Clayton’s HQ), but we’d gotten loaded up and, as I say, I’d not long left when I saw him.”

John explains that, while driving, he noticed that the cars ahead of him were beginning to swerve around something. However, he didn’t initially realise that something was untoward.

“A van Infront of me swerved right onto the other side of the road, mounting the curb on the opposite side. That was when I spotted a dog, I think it was a cocker spaniel or similar, right in the middle of my lane.”

John notices that the dog is on an extendable lead. He follows the lead with his eyes and sees a man, seemingly unconscious, but still with a firm grasp on the item. John pulls over at the side of the road, switches on his hazard warning lights, and exits his vehicle.

John explains that, in his mid-twenties, he was part of a volunteer mountain rescue team. Somewhere, he received detailed advice, and advanced medical training, for situations such as this.

During this time, occasionally he and his team would encounter someone unconscious, but usually this would be due to alcohol intoxication.

This was John’s first thought as he approaches the man.

“You have to be careful when you wake up someone who is under the influence.” Says John. “There’ve been times in mountain rescue when I’ve gone to wake someone up who we’ve found, and their first instinct is to fight. This was what was in my head at the time.”

“Another thought that was in my mind was that of coronavirus. I didn’t want to get too close to him if I didn’t have to – due to social distancing measures.”

John starts asking loudly whether the man is alright. After a few seconds of this there is no response. John now has to weigh up whether he will break social distancing rules to potentially save the man’s life.

“It was at this point I was getting extremely worried. I decided the best course of action was to get closer to him to see if I could find signs of life. I began to shake his shoulders; I even gave him a right good pinch on the ear, but there was still no response. No movement at all.” says John.

“I checked to see if he was breathing, or if I could find a pulse, but when neither of these things were forthcoming, it occurred to me that he’s probably had a heart attack. I was terrified at this point.”

John describes the surge of panic he felt in this moment. Thoughts flying through his mind at a million miles an hour. He says that, although there was no pulse nor breath, the man’s face was not discoloured, and the fact that he still had a tight hold of the dog lead threw him somewhat.

“I weighed all of this up in my mind, but decided I had to start CPR immediately.” says John.

“I was committed at this point. I began to do compressions, and honestly I’m not sure now how many I did. I’d heard that to do chest compressions correctly, then ribs should be breaking. I was thinking the entire time ‘Am I doing this right?’, Am I gonna make it worse?’”.

“After one really forceful press, I felt something move, followed by a big gulp of breath.”

John instantly stops CPR and begins talking to the man, asking if he is ok.

It was at this point that the man began to moan and make small movements, the first signs of life that John had witnessed.

“He wasn’t fully awake or especially responsive, but he was definitely alive. I then secured him in the recovery position as we’d been taught in mountain rescue.” Says John.

“In that moment, he began to have some sort of fit. I had to maintain him in the recovery position to ensure that his airways stayed clear. I did this by holding his legs, because I was also aware that if you hold someone’s arms during a seizure, they can break.”

John waves his arms at passing traffic until someone stops. Eventually a car pulls up and two men get out. One of whom actually knows the man who has suffered the cardiac arrest. The new man tries to speak to the half-conscious man on the ground, and this time there is more of a response. The other man calls an ambulance.

“A couple of minutes pass and another gentleman pulls his car over and shouts ‘I’m a first aider, I’m a first aider’ and he’s getting right up in my face, not acting helpfully at all, so there was a bit of a confrontation. I told him to step back, because of social distancing, and said that if he wanted to be useful, he should direct traffic around my vehicle – which he did.” says John.

“The man who has suffered the heart attack is still having periods of fitting, I’d say he must’ve had about 4 or 5 in total. But between these he is getting more and more responsive. Eventually we managed to get him talking a little bit.”

The man then mumbles to John that he lives across the road in a block of flats. John and the other men manage to extract the flat number, and the security code to get into the building. One man goes to find the flat, with the dog, in an attempt to locate the man’s wife. Five minutes later he returns with the man’s wife, whom John explains the situation to.

“At this point, everything was far more under control than it was.” Says John.

“The ambulance arrived, and I explained what had happened to them too, I helped him into the back of the ambulance and they took him off to hospital. It felt like an extremely long wait, but in truth the ambulance had arrived within 5 or 6 minutes of the call.”

“After this I saw no reason to stay, I got back in my vehicle and carried on with my day. As I drove, I realised that I should phone Michael (Michael ‘Mick’ Owens, Clayton Glass’ Dispatch Manager) to explain the situation, that there had been an incident, because while this was happening, another of our drivers had gone past, and I was concerned that it looked like I’d possibly run over the gentleman.”

“So, when I arrived at my first job, I gave Michael a call. He understood completely and offered to come pick me up, bring me back, and finish my jobs. But I said no no just give me 10 minutes and I’ll get on with my day. I did feel a little bit confused, a bit sick, but I said just give me a minute and I’ll be fine.”

John tells us that he explained the situation to the people at his first job of the day, saying that they gave him all the time and space he needed, even unloading the stillage themselves. He felt much better after this.

On the morning of Wednesday the 24th of June, Clayton Glass received a call from a man recovering at home following a heart attack. Saying that all he remembers is being helped by a man in a high-vis jacket, driving a Clayton Glass wagon.

Since then, John and the man have been in contact, and have organised a dinner together once social distancing measures have been relaxed.

“He wanted me to come round straight away!” Exclaims John, “But I said: look you’re not in my bubble, I don’t think that’d be very wise. I think he just wants to show his appreciation, but I said there’s no point in me saving your life one minute, then killing you the next!” John says laughing.

“I don’t know what made me stop, it wasn’t really a thought process, I just saw that something had to be done, and then it all happened very quickly.”

“I do appreciate everyone’s kindness, some people have been saying I’ve been a bit downbeat since it happened, but I was terrified! I’m just very happy that he’s OK. That’s the main thing. I’ve heard I’m being honoured with an award which is nice. Give me an award for getting all my jobs done in a day! That’s something I feel more deserving of.”

Despite his humility, all of us at Clayton Glass would like to commend John Douthwaite for his heroic display of bravery and selflessness. If it weren’t for him arriving on the scene when he did, the situation could’ve been much worse. Well done John.