3 Elements of Teamwork that Contribute to Success 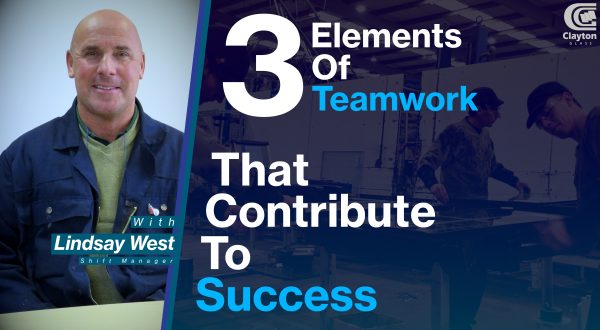 At Clayton Glass, we firmly believe that a fluid, well-oiled, hardworking team environment contributes greatly to a business reaching its maximum potential. At the beginning of the year, we sat down with Lindsay West, Shift Manager at our Huthwaite site – and a firm believer that he is part of one of the most effective factory floor teams in the country, to discuss the elements that come together to produce a team that clicks.

For Context: As mentioned, Lindsay West is based at Clayton Glass Huthwaite, a site, along with Clayton Glass Blackburn, that we acquired towards the end of last year. Prior to this purchase, these sites were owned by a company on the brink of administration. The team we inherited with the purchase of these sites had been working with these difficulties hanging over their heads for the best part of 18 months, something Huthwaite Plant Manager Jonathan Bryan described as “survival mode” in a previous interview. A lot of the stories, references and analogies Lindsay mentions here are in relation to his team overcoming challenging odds faced in those uncertain times.

The first element of a successful team Lindsay cites is that of comradeship, team spirit and community. “The comradeship we have here, it’s my favourite thing about my job.” States Lindsay. Lindsay tells me that before he became Shift Manager, he himself worked a multitude of different roles on the factory floor. In this time he got to know everyone, something he believes is important in his currently role.

“Everyone here knows each other, we all know that we can trust each other do their jobs, and do them well, and when things get tough, we know that whenever we need to put it in, we put it in, we get it done, we do not like failing.” There is complete certainty to the way Lindsay speaks here, not just about the statements he makes, but also in the repeated use of the word ‘we’, he refers to the Huthwaite team in unison, as a whole, with complete safety in the knowledge that they are all pulling in the same direction.

From In to Out

We’re not afraid to get our hands dirty. In fact, we’re hands on pretty much every day! We finish what we have to do in the offices, then we get out there and jump on any job that needs doing, no matter how big or small.

This comradeship spills over and directly affects the personal lives of the staff working on the Huthwaite factory floor. Lindsay explains that he and a couple of the other guys are season ticket holders at local football team Nottingham Forest, going to all the games together, and sitting beside each other. Some of the others have a 5-aside team that compete on a weekly basis. “A lot of the guys here are good friends outside of work!” Says Lindsay with a smile. “I believe this all contributes to the effectiveness of the team as a whole.”

When it comes to producing a team that clicks, respect is vital. “I believe that at the core of a good team there is a strong respect between all the members, including for those in charge.” Says Lindsay. Lindsay begins by explaining that when he was starting out on the shop floor, he had a huge respect for his Shift Manager, Graham Sutcliffe (Graham is now Lindsay’s counterpart Shift Manager). “I came up through Graham, he’s taught me an awful lot. I believe he’s a big part of why this team functions so well.” Says Lindsay.

Lindsay explains that there is very much an open-door policy when it comes to himself and Graham. “We’ve got a team here, where when these lads have got personal problems, they can knock on the door and speak to us about it. Graham’s brilliant at that I must say, his man management skills are unbelievable. Even outside of work they can always talk to him, or me for that matter!”

Lindsay cites decisiveness as a key factor in building respect. “There are times that you must be decisive as a Shift Manager. Sometimes in the past we’ll have had a stressful situation where a piece of machinery breaks down. This leads to us falling behind, and a decision needs to be made on what we’re gonna do”. Lindsay explains that this is the moment where decisiveness plays a role. A clear plan, explained transparently, on how the issue will be resolved or worked around. Then effectively communicated to those in the offices, keeping customers in the loop. It is in this way that the successful team functions.

Respect: Earned Not Given

There is a very simple truth to life, that respect is earned and not simply given away. Lindsay knows this, and explains the ways in which the Shift Managers have earned the respect of those around them on the factory floor. “We’re not afraid to get our hands dirty.” Says Lindsay. “In fact, we’re hands on pretty much every day! We finish what we have to do in the offices, then we get out there and jump on any job that needs doing, no matter how big or small.” Lindsay tells me that he believes this sets an example. That the rest of the factory floor team sees this, and knows that they are supported in their roles. Thus creating an environment where people work for each other.

Another famous saying, first quoted by Aristotle, is: “The whole is greater than the sum of its parts”, meaning that if every member of a team is working together and for each other, then the end result is far stronger than anything that these individuals could achieve on their own.

Everyone here knows each other, we all know that we can trust each other do their jobs, and do them well, and when things get tough, we know that whenever we need to put it in, we put it in, we get it done, we do not like failing.

Lindsay speaks passionately and at length about respect and comradeship. That which, he both feels personally from the team at Huthwaite, and sees among the staff that work there. But there’s something even more genuine, something fiery, about the way he speaks about the determination, and dedication to the cause, of the Huthwaite team. “There’ve been times (under previous ownership) where me, and the others, have gone extremely long periods of time without a day off. These were times where the business, and our jobs, were on the line.” Explains Lindsay. “Where others may have faltered, this team always stood up and delivered. We got the job done. Sure we were tired at the time, but we didn’t let that stop us from getting the job done. This team hates failure, and there are not many problems we don’t find a way around.”

After pausing for a moment, Lindsay definitively states: “I’ve said it before, and I’ll say it again. I don’t think there’s anyone like us in the country in this game. We’ve been through hardships together, and I honestly believe that we’d be hard-pressed to be beaten.”

In conclusion, we now know that 3 elements of teamwork that contribute to success are as follows. Firstly, comradeship. Lindsay’s favourite thing about his work, and tremendously important in building team ethic and an environment where workers feel content, and able to work at their best. Secondly, respect. Something Lindsay believes is vital to a functioning team. Built through trusting individuals to perform their tasks to standard, decisiveness, and by being hands on and working just as hard as everyone else. Thirdly, the team members. The individual strength of character and ability, of each of the members of your team. Combined with their willingness to join the whole. Finally, when you marry these three elements into the same team, then you have a force to be reckoned with. This is how teamwork contributes to success.